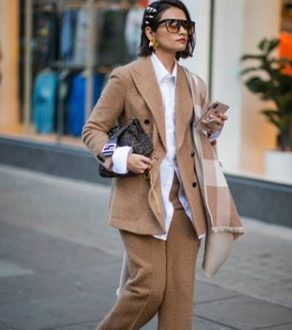 It was once the occasion for which street style stars spent weeks planning their looks in order to be the most individually-dressed person in attendance, but this season London Fashion Week welcomed a huge brood of guests wearing almost exactly the same thing.

Universally flattering, the colour that seems to be emerging as the hottest of 2019 is (drumroll please) BEIGE. We know!

But despite its less than exciting connotations, beige can in fact be full of impact. Particularly when it’s worn head-to-toe with varying shades of the very same hue, all the way from almost-creams to nearly-browns. Don’t get us wrong, tonal dressing is no new phenomenon. But for everyone to latch onto the same base hue and play about with it in such similar ways is unusual. While the humble trench was a classic way to wear the look, others experimented via woollen two-pieces, silky slip skirts and animal print accents.